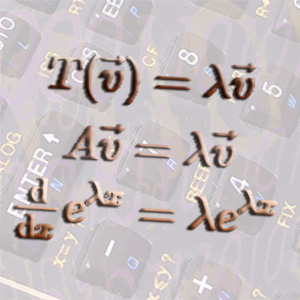 Matrices form a fundamental part of electrical networks. Components such as capacitors and inductors introduce complex number arithmetic. Other fields where complex eigenvalues are common place are control engineering and mechanical engineering. Even when the matrix only has real numbers, there might be complex eigenvalues. One example is a clock, where the imaginary part of the eigenvalue is the frequency of the pendulum.\(\)

This program was inspired by a discussions with Michiel Niemijer [1], John Ferman’s article [2] and the routine “ALLROOT” from Ruckdeschel’s book [3].

We implement the algorithm on the HP-41 to calculate eigenvalues. To do so, we use functionality from the Advantage ROM. We will not calculate the eigenvectors, due to limitations of this ROM and the limited amount of memory on the HP-41.

The program first determines the characteristic polynomial. An eigenvalue is determined and removed from the equation. Remaining eigenvalues are determined until all are found.

Because the algorithm also finds complex roots, it takes a bit longer compared to routines that only find real roots. Matrices with double eigenvalues pose some additional challenges, but the algorithm will always finds the roots.

Given a square matrix A, we want to find a polynomial whose roots are precisely the eigenvalues of A.  A scalar \(\lambda\) is an eigenvalue of A if and only if there is an eigenvector v≠0 such that

This can be rearranged to

here \(I\) denotes the identity matrix.

If there exists an inverse

Linear algebra teaches us that a matrix (here \(A-\lambda I\)) is non-invertible if and only if its determinant is zero, thus leading to the characteristic equation.

The left-hand size of this equation can be seen to be a polynomial function in \(\lambda\), whose coefficients depend on the entries of \(A\).  This polynomial is called the characteristic equation.  Its degree is \(n\).  It also can be shown that any n×n matrix has at most n eigenvalues.  [7]

The function “KV” determines the characteristic polynomial of the square matrix “MAT”.

\(B\) is removed and the coefficients are calculated and stored in matrix C (\(C\) is re-dimensioned to N×2).

The characteristic polynomial of the matrix follows as

This polynomial has N solutions for x (the eigenvalues). an-1 .. a0 can now be calculated as

Determine eigenvalue and remove it from the equation

ALLROOT is an iterative algorithm that attempts to calculate the roots of a given series or function by repeatedly using the Muller’s Method [4] in the complex plane, and removing the roots already found by division. It will iterate until one of the following conditions is satisfied:

Because \(x^2 – 14x + 36\) is also zero for the second eigenvalue, the error in the prior eigenvalue barely matters. Refer to the examples for more details.

The root-seeking algorithm is restricted to real coefficients.  That implies that its complex roots come in conjugate pairs, such that if z1 is a root, its complex conjugate \(conj(z_1\)) is also a root.  Polynomial with complex coefficients can be rewritten as two independent polynomials with real number coefficients using Cauchy-Riemann equations.

There are two important properties to finding the roots of a polynomial. [2]

You may want to experiment with real eigenvalues using “Eigenvalues for HP-41cv/cx“.

The input matrix should be square. Matrices with real coefficients should be entered using MEDIT, after which F02 should be cleared. For complex coefficients, CMEDIT should be used and F02 be set. The name of the matrix should be placed in the alpha register. The names can not be “b”, “c”, “t” or “w” because those are used internally by the program. The matrix may be stored in regular register above R26.

To find the roots of a polynomial, you can

To view the matrices C, T or W you should always use XEQ “MEDIT” (not XEQ “CMEDIT”).

The MAT, C, T, en W are now in place. By calling XEQ “MEDIT”, we can inspect the roots

The two eigenvalues are 3,394 en 10,606 when the imaginary parts are neglected given that they are a magnitudes smaller as the real parts.

That implies that the eigenvalues are

And now for the bad news .. I have the program on magnetic tape, replaced the gummy wheels in the tape reader, but still it will not read the tapes. I will look for the hard copy, and post it later.

Around the same time, the routine allroot.bas applying Meuller’s parabolic fitting method in the complex plane was published [2].  Perhaps it was one of those rare moments that a piece of basic code inspired me.