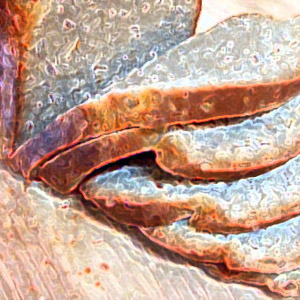 Baking bread is an experiment in biochemistry. The baker combines flour, yeast, water and salt in a bowl, shapes it all into a dough, lets it ferment and bakes it in a hot oven. The fermentation makes the bread chewy, fluffy and tasty.

The main ingredient in bread is flour. It is made by milling grains such as wheat so that they release their starch and proteins. Whole wheat flour contains about 70% starch, 14% proteins, 11% fiber, 2% fat, 1% complex sugars and 0.5% simple sugars.

Protein and a little salt make the bread chewy

Proteins are molecules build from hundreds of amino acids. When flour is added to water and kneaded, two of the proteins (gliadin and glutenin) swell up like sponges and form a tough elastic substance called gluten. Gluten can stretch and trap the bubbles of gas that make dough rise.

Salt strengthens gluten by slowing down the enzymes which catalyze the breakdown of proteins. If you add too little salt, the dough is tough and sticky. If you add too much, water flows out of yeast cells by osmosis. Then nutrients are lost and production of carbon dioxide slows down.

Yeast breaks down starch to make bread fluffy and tasty

The microscopic yeast cell is a tiny form of fungi or plant-like microorganism. It lacks chlorophyll, and gets its energy from fermenting simple sugars. Like other cells, yeast uses enzymes to carry out chemical reactions. For a great introduction into cells and their enzymes, refer to How cells work.

The starch molecule is a long polymers of simple sugars linked head to tail by chemical bonds. There are two main stages during the fermentation of a dough:

As the dough bakes into bread, the heat causes the alcohol to evaporate and the carbon dioxide bubbles to break. This leaves the tiny air pockets in the baked bread that make it light and fluffy.

In 100 grams of flour, 1 to 10 million micro-organisms live among which only 30,000 are the so-called wild yeasts. A standard amount of 2.5 grams of baker’s yeast for 100g of flour provides 25 billion yeast cells. This is the proof that baker’s yeast is predominant in the bakery fermentation.