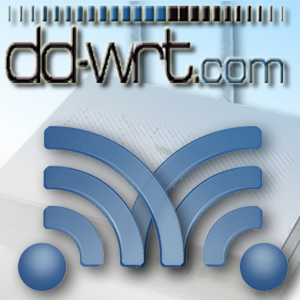 This article shows how you can use a $75 consumer class router to support two different networks.  Besides the usual primary network, it will create a secondary network supporting both wireless and wired connections.  The secondary network could  be used to provide internet access to customers or visitors. 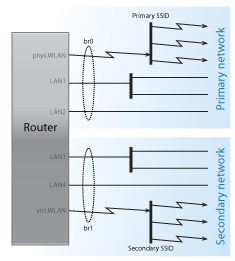 The router is assumed to be flashed with open source DD-Wrt firmware.  This firmware adds some business class features to your router.  The router will be configured by taking advantage of two features that allow network traffic to be separated:

The router is assumed to be running open source DD-Wrt firmware and configured for a single wired and wireless network.  The router should also be configured for shell access (ssh) or telnet.  Further, the reader should have a basic understanding of

The configuration presented here has been tested on an Asus RT-N16 router running DD-Wrt mega build 15943.  The approach outlined might also apply to other routers or builds, albeit with minor changes.

Many consumer class routers are based on a chipset consisting of a IP switch and System-on-Chip.  For example, the Asus RT-N16 router that is build around:

Other GigE routers such as the Cisco/Linksys E2000 or E3000 are very similar.  I you have an Asus RT-AC68, refer to my updated post.

The block diagram above shows the data paths within the router.  Note:

The switch tags incoming frames with a VLAN identifier.  Frames arriving on the WAN port are tagged as VLAN2, while frames from the LAN ports are tagged as VLAN1.  The frames destined for the CPU are sent on port 8.

The tagging configuration is stored in vlan#ports variables where ‘*’ symbolizes the default path.  Note that the vlan0ports variable appears to be unused on GigE routers.  For the switch to move frames outside of any vlan, it needs to include port 8.  This allows the SoC to route the packet.  The vlan with the default is used for packets that do not have a vlan tag (see here).

An other important variable is port5vlans.  It identifies every active VLAN plus the number 16 that indicates that tagging is enabled.  The other variables appear only for the WebGUI.

Every active VLAN needs to have its name set to et0.

To create a second network, we need to introduce an additional VLAN and an additional SSID for the wireless.  The two can then be bridged together and given an unique subnet address.  Before you start, I highly recommend making a backup of your current configuration.

We will use the shell (ssh) interface to configure the VLANs (because the GUI on Broadcom based routers  have some related bugs).  Login using ssh, and run the following commands:

Now that we have the two networks up and running, it is time to separate them.  The firewall rules listed below added to Administration > Commands > Save Firewall.  If you use an USB memory stick, the rules can also be stored in an executable /jffs/etc/config/*.wanup script.  Such a script runs automatically each time the WAN link and firewall are up (see Script Execution).

To restrict br1 from accessing br0 and visa versa,

Optionally, to restrict br1 from accessing the management interface of the router.

To test the interfaces, configure a space computer interface for DHCP and connect it to each of the LAN ports.  Then verify that the assigned IP address matches the subnet of the network.  Do the same with the wireless networks.