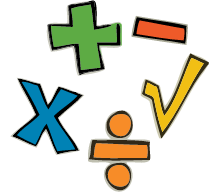 This is part 9 in a continuation on the quest to answer the question “How do computers do math?”. It should how to build logic circuits using programmable logic.

Logic devices can be classified into two broad categories

Programmable logic devices (PLD), can be changed at any time to perform any number of functions. Prominent flavors of PLDs are:

A CPLD would be sufficient to implement the combinational circuits discussed so far, however our ultimate goal is to create a modest microprocessor circuit. As we will see later, a microprocessor circuit requires a state machine for which we need a FPGA. As a result the remainder of this text will focus on a FPGAs implementation.

The core of FPGAs contains a vast array of interconnected logic cells.

The main vendors are:

Each logic cell consists of:

Each IO cell consists of:

The figure below shows a typical matrix organization of the logic cells that are interconnected using programmable interconnects.

The application-specific integrated circuit (ASIC), is similar to the FPGA, except that it is not reprogrammable. The advantage is higher speed and smaller footprint.

The logic next step is the Arithmetic Logical Unit that forms the heart of today’s computers.

Now let us build something with Gate-Level Verilog!

The inquiry “How do microprocessors work?” picks up from here.