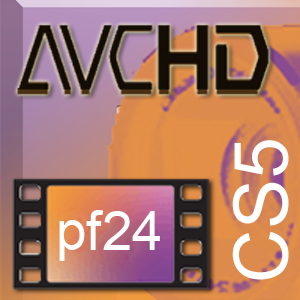 Starting with CS4, Adobe Premiere Pro supports AVCHD video.  For owners of AVCHD camcorders, this is an huge step forward.

If you were one of the early adapters, you might have followed my guide Editing AVCHD 24p using Adobe Premiere Pro CS3. If you made the jump to CS4 or CS5, you can not tweak your old projects so that they use the .mts files directly.  The following work flow did the trick for me:

Premiere Pro makes a fair attempt at removing the pull-down, but on high motion scenes, it misses the boat and doubles frames or leaves interlaced frames.  At first glance, playing with the the Field Options appears to help, but closer inspection of the rendered output will reveal doubled frames giving the video a stuttered look.  Those who shoot “24p wrapped in 60i” and expect a correct pulldown will need additional steps.

Oddly enough the companion product After Effects CS5 (AE) does a better job at removing the pull-down.  Maybe one day, the Premiere Pro developers will decide to reuse the .mts import functionality from After Effects.  Until then, you will need some additional legwork to extract the 24p from the 60i container.  For this, the following approaches come to mind: